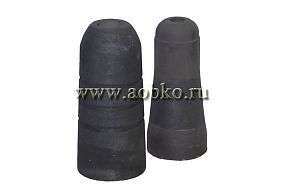 In 1986 – 1987 VIO in collaboration with Borovichi Refractories Plant has developed process of corundum-graphite nonswirl nozzles production, which excluded application of unavailable and expensive materials – crystalline silicon and silicon carbide and use of expansive operations of hard firing and air brick glazing.

Further developments of JSC “Borovichi Refractories Plant” on advancement of production processes resistant to healing of nonswirl nozzles, lead to creation of biceramic product with so called “anticlogging” coating of nozzle channel, which prevents its healing by nonmetallic deposits. Well-known fact of absence of healing in nonswirl nozzles based on zircon push to the following in-house development this time – zircon-based anticlogging coating. Nonswirl nozzle with zircon-based coating did not displayed surface deterioration of working channel or any deposits after service.

Shape and dimensions of nonswirl nozzles should correspond to the customer’s drawings, approved by the manufacturer. Working surface is specified in the drawings.